Because Jessica's story, much like WMDs and Saddam's nukes and biotoxins and Orange Alerts and our imminently prosperous economy and Jenna Bush's ostensible prowess with a beer bong, does not rely on truths. We do not rely on first-hand reports. We do not rely on anything so piffling and small and dangerous as honesty. We rely, simply, on PR. We believe the TV images of the bogus "rescue" at the expense of common sense because we are a nation drunk on the idea that the U. And goddammit if Hannity and Rush and O'Reilly say it happened like that, it must be true, and damn you America-hating libs for daring to question the integrity of our armed forces when they are out there right now protecting us from, uh, what was it again?

Dick Cheney's pallid sneer? Something like that. Look, there is no war without spin. There is no war without outright lying to the populace, without trying to coerce a wary nation into supporting our unprovoked savagery by way of Hollywood-style set pieces performed specifically to deflect attention from the brutality and the decapitated children and the still-dying U. This is nothing shocking. This is nothing even remotely unusual or uncommon.

The fabric of war consists not of gallant battles fought by hardy soldiers for some noble collective good yay yay go team, but of manufactured tales of valiant brotherhood and purebred heroism designed to make the vile pill slightly less bitter. War is, of course, vicious and primitive and disgustingly violent and not the slightest bit gallant, and America has rarely been more thuggish in its short history than when we annihilated Afghanistan and Iraq lo these past few years, the world's greatest bloated superpower hammering down on two nearly defenseless, piss-poor nations in the name of, well, petrochemical rights and strategic political positioning.

It's not a war, it's a gang beating. Uncle Sam wants you. And, hence, we need the sugar. We desperately need the sweet, teary-eyed images of flags and salutes and stunning "rescues" to make it all go down smoothly, to suppress the collective recoil, the national gag reflex. After all, who wants to see burning babies and crying mothers and hot screaming death on prime time?

Show me Old Glory waving in slo-mo! Ahh, that's better. We need, in short, pretty year-old memory-impaired soldier girls being rescued by manly SEALs wearing bitchin' night-vision goggles and yelling "Go! Lynch when the U. Of course, this isn't about Jessica herself at all.

She has served her country bravely and is probably very sweet and at least partially articulate and is just in it for the quick wad of cash, and what the hell she doesn't remember a damn thing about the rescue anyway, which makes her the perfect one to write a whole book about it, with Bragg along to, ahem, "fill in the blanks. And we can just imagine how the Pentagon brass doubtlessly winked at Jessie and said hey sweetie, you go girl, take the book deal, and the movie deal, and the commemorative plates by the Franklin Mint, it would be good for the country if you go along with the ruse, there there now, that's a good little soldier.

Jessica Lynch is but a puppet, a toy, a convenient TV-ready canvass onto which we can project our impotent myths of patriotism and war, spit forth by the BushCo military machine to ease America's pain, to assuage that increasingly nagging fear that we have committed this horrible thing, this irreversible atrocity. In short, Jessica's myth helps numb the idea that we have removed a pip-squeak, nonthreatening tyrant from power and left behind a reeking miasma of violence and bloodshed and thousands of dead citizens, more rabid anti-U.

And little Ms. Lynch, she is America's new doll.

She is our little G. Jessica, all safe and clean in her homecoming fatigues, her imaginary story ready to grace the nightstands of the happily gullible across America. Because really, why bother with all that icky messy nonfiction, all that violent unsavory fact, when straight fiction is so much more, you know, patriotic? 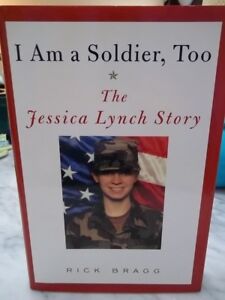 Join Mark on Facebook and Twitter , or email him. His website is markmorford. Mark's column appears every Wednesday on SFGate. This is the world we live in. This is the world we cover. Because of people like you, another world is possible. There are many battles to be won, but we will battle them together—all of us. Jessica Lynch has won the hearts and minds of Americans. In the hands of Rick Bragg, a renowned chronicler of American lives, her tale is told at last, with grace, and care, and astonishing candor. Reviews Review Policy.


Published on. Export option. Learn More. Flag as inappropriate. It syncs automatically with your account and allows you to listen online or offline wherever you are. Laptops and Computers You can listen to audiobooks purchased on Google Play using your computer's web browser. More by Rick Bragg. See more. Rick Bragg. From the beloved, best-selling author of All Over but the Shoutin', a delectable, rollicking food memoir, cookbook, and loving tribute to a region, a vanishing history, a family, and, especially, to his mother.

I am a Soldier, Too: The Jessica Lynch Story by Rick Bragg

Margaret Bragg does not own a single cookbook. She measures in "dabs" and "smidgens" and "tads" and "you know, hon, just some. Her notion of farm-to-table is a flatbed truck. But she can tell you the secrets to perfect mashed potatoes, corn pudding, redeye gravy, pinto beans and hambone, stewed cabbage, short ribs, chicken and dressing, biscuits and butter rolls. The irresistible stories in this audiobook are of long memory -- many of them pre-date the Civil War, handed down skillet by skillet, from one generation of Braggs to the next. In The Best Cook in the World, Rick Bragg finally preserves his heritage by telling the stories that framed his mother's cooking and education, from childhood into old age.

Because good food always has a good story, and a recipe, writes Bragg, is a story like anything else. All Over But the Shoutin'. This haunting, harrowing, gloriously moving recollection of a life on the American margin is the story of Rick Bragg, who grew up dirt-poor in northeastern Alabama, seemingly destined for either the cotton mills or the penitentiary, and instead became a Pulitzer Prize-winning reporter for The New York Times.

It is the story of Bragg's father, a hard-drinking man with a murderous temper and the habit of running out on the people who needed him most. But at the center of this soaring memoir is Bragg's mother, who went eighteen years without a new dress so that her sons could have school clothes and picked other people's cotton so that her children wouldn't have to live on welfare alone.

Evoking these lives - and the country that shaped and nourished them - with artistry, honesty, and compassion, Rick Bragg brings hone the love and suffering that lie at the heart of every family. The result is unforgettable. Ava's Man. The Prince of Frogtown. He learns, right from the start, that a man who chases a woman with a child is like a dog who chases a car and wins. With the weight of this new boy tugging at his clothes, Rick sets out to understand his father, his son, and himself.